The Pacific Specialty quoting and policy servicing platforms will be temporarily down on August 18, 2022 for routine maintenance from 6:00pm PST to approximately 10:00pm PST. We apologize for the inconvenience. What matters to you, matters to us. 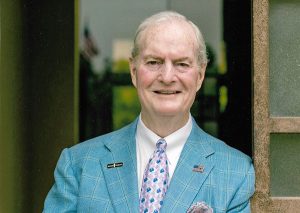 Jack McGraw is an Irishman, a grandfather, a twin, a devout Catholic, and a policy pioneer who has paved his own path in the insurance industry. Born and raised in Omaha Nebraska, Jack McGraw grew up destined for this career as his native city was a renowned regional insurance hub with many of its young natives trying to hack their way in this booming business. Jack’s birthday, which he shares with his twin sister Jane, is December 30th. That would make him 87 years old this December, commemorating an impressive 70 years in the insurance industry with 64 of those years spent in a full-time executive position. Jacks illustrious career began in high school when he took up a job working for Central National Insurance Company. Since then, Jack has aided countless companies in opening new offices, improving processes and spearheading innovative initiatives along the way. Today, Jack McGraw is responsible for the conception and growth of the McGraw Group of Affiliated Companies but credits his wife Joan with being the backbone that strengthened the foundation of the business. Joan worked as secretary-treasurer of the corporation for 20 years. When asked about Joan, Jacks serious façade gives way as it becomes clear he does not mind bragging about his wife of 57 years.

When I left as president of El Dorado and we decided to start our own general agency, I needed a good partner very quickly. It turned out that partner was my own wife. I needed someone who I trusted who could handle the money portion of things, the premiums. There is nobody better than Joan and luckily, she agreed. She is very good at handling money and very detail-oriented. She thought she might do it for 3-4 weeks but it turned into 20 years. To this day, she still claims that she doesnt know anything about the insurance industry.

When asked about a single lesson he has learned spending nearly 7 decades in the insurance industry, Jack alludes to proper management and keeping a pulse on your employees as the basis of any good company.

Well, I have to believe that the management of people has to be the core of any good business. You need to understand who is doing what so that you can create cohesion in the workplace. Hiring good employees and delegating tasks is crucial to consistency in business.

Jack hopes to see the current industry continue to grow with the exception that more family-owned, neighborhood type businesses (like Pacific Specialty Insurance Company) are established to dilute the reign of the major corporations.

My hope is that there remains the possibility for people to grow these smaller companies instead of having a few major names run the entire industry. I would love to see more entrepreneurial attitudes lead these smaller companies so that they can develop products and services that are not currently available proving that you dont have to be a large, corporate company to make a difference.

Today, Jack is still an active member of the board of the McGraw Group of Affiliated Companies.